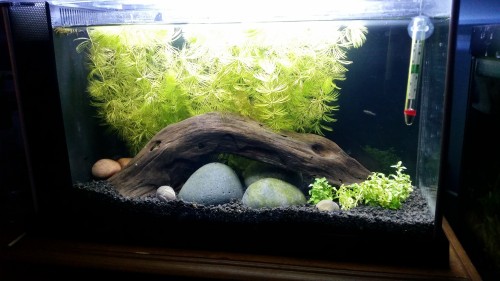 I’ve been a freshwater aquarist for over twenty years, but I usually avoid keeping any tanks smaller than ten gallons. Don’t get me wrong, I find the increasingly popular trend of nano fish-keeping a grand idea, especially admiring the designs of some of those nano setups. However, I like a tank that flourishes, and I don’t like stuffing fish inside the aquatic equivalent of a studio apartment. 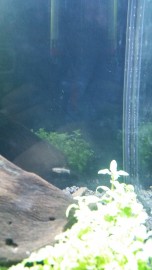 Well, a couple of weeks ago, I attended a meeting at my local fish club. The meeting always closes with a mini-auction, where I usually stock up on hornwort, guppy grass, and occasionally, fish that I would like to keep. I won a couple of breeding pairs of Least killifish (Heterandria formosa). Not a true killifish, but a livebearer closely related to guppies and mollies, of the family Poeciliidae. They are one of the smallest livebearers in the world, and considered the smallest among North American livebearing fishes, being endemic to Florida. With the females barely exceeding an inch and a half, I didn’t feel comfortable adding these fish to an established aquarium, where they might be out-competed for food, or worse, become food. A year ago, I bought a Fluval Spec V for less than half it’s retail value, but had yet to use it for the reasons specified above. So I decided to set up the Spec V as a single species starter colony for these shy yet fascinating fish! The plants are hornwort (yes, I have to trim it weekly for it grows like a weed) and staurogyne repens. The substrate is Eco-Complete, and within the filter reservoir is a 25 watt, pre-set heater, which maintains a temperature of about 76 degrees Fahrenheit.